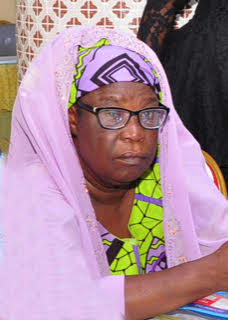 I am an educator who served the Plateau State government as a teacher for 35 years. I am from Jos North Local Government Area, Plateau State. I was born in a Christian family. My father is Daniel Rwang Dung and my mother’s name is Vou Justinasha. Before I got married, my name was Mary Theresa Yop. My parents are from the Berom ethnic community. My marriage to a Muslim marked the beginning of conflicts with my brother.

When I gave birth to my first son, I went home to see my parents. My brother said he did not want to see a Muslim in our house. So, he set upon me and my child with blows – shouting that he was going to kill us. Someone called my husband who came and took us away to Our Lady of Fatima hospital. There, we were admitted and our injuries treated. For both our sakes, I decided to forgive him and forget.

In 2001, rumours began in Jos North that people were being killed. People began moving out. In September 2001, a Christian girl was walking home while the Friday prayers were going on. She was beaten up and this sparked violence between Christians and Muslims. Many people were killed and properties were destroyed.

In our house, there were eight young men – Christian – from the Igbo community who had come from Abuja. To save their lives, I hid them for nine days. On the ninth day, my son took them to Abuja and they told their parents that they had found a mother in me in Jos.

I then began working as a peacemaker. I wanted the two identities associated with me, my Christian and Muslim relatives to know that the differences in their religions should not make them fight. I started working as a peacemaker. After the 2001 crisis, I was the head teacher of Kaboug Primary School. One man came to my office and said the Muslim Hausas were killing Christians and therefore he had come to kill me. God was so kind that my staff came and saved me. Much later, I met the man and told him I had forgiven him. I often remind him of his statement so that he does not do it to anyone again.

In 2004, one Muhamad was given a position as a chairman to oversee federal government activities in Plateau State. This in turn started another violent crisis because he was Muslim and again many people lost their lives. In 2006, another violent crisis began again and many people were killed. Some people left Plateau State as IDPs to neighbouring States. The Plateau Government set up a mediating committee to which I was appointed as a member. We went to Bauchi, Gombe and Nasarawa States where most of our people had run to for reconciliation meetings.

I then attended a workshop to build my capacity on peace-building, reconciliation, mediation and trauma healing. I am well respected by both Christians and Muslims in the community. I was the chairperson of head teachers in Jos North for seven years before my retirement. I set up a team of women headmistresses called Jos North women head teachers working for peace. The group is still active, holding meetings every month discussing ways of preventing violence with teachers and students. The female head teachers are now 26 from different ethnic and religious communities. Sometimes they call emergency meetings.

I joined a dialogue process of different ethnic groups and religious bodies as one of the decision makers. We had a women’s steering committee that held dialogues in the rural communities in Jos North, Jos South, Barkin ladi and Riyom. We were able to hold dialogues with 500 women from Jos South, 500 from Barkin Ladi, 500 from Jos North and 500 from Riyom. We then signed a peace agreement. I am now a trained mediator.