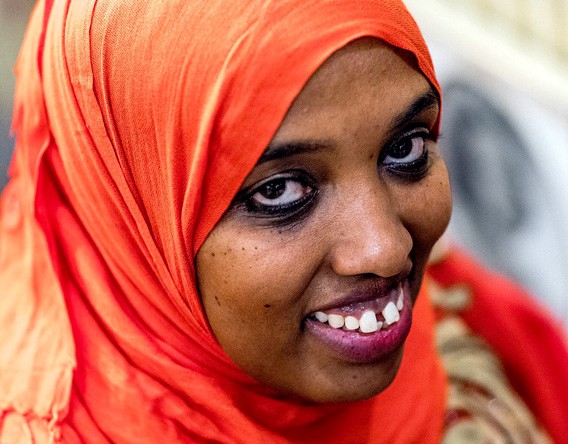 Adan was born to parents who were from two warring tribes in  Marsabit ,  Northern Kenya . After her training as a lawyer, she returned to her hometown in order to promote peace between the conflicting  Borana Oromo ,  Gabra  and  Rendille peoples . In 2003, she founded  Horn of Africa Development Initiative , a  non-governmental organization  she uses to foster peace and advocate for education in Kenya.

Through the Horn of Africa Development Initiative, Adan launched a programme called "Shoot to score, not to Kill", that uses  soccer  to engage Kenyan youths in advocacy for peace.

Horn of Africa Development Initiative (HODI) is based on four supporting pillars: Advocacy,Education,Economic sustainability and Inter-ethnic Cohesion. Through HODI she started a programme "Breaking the Silence" which has four modules: Be yourself,be healthy,be empowered and know something about finance. Fatuma Adan was the first African woman to be elected as member of the streetfootballworld in 2015. In 2017 she was nominated as part of the Dream Team of the Global Goals World Cup. In January 2011, Adan received the  Stuttgart Peace Prize  for "combining soccer and emancipation". In 2013 she was invited to talk about her work with the Horn of Africa Development Initiative at the  Geneva Peace Talks  on 20 September 2013. The talks were organised by the  United Nations  and other groups for the  International Day of Peace.