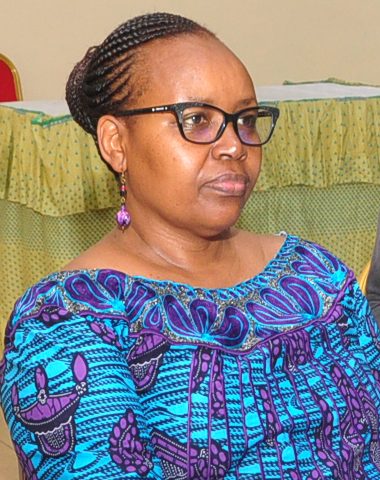 Léonie Abela is an African lady, born in Kampala, Uganda; grew up in Goma/Eastern DRC where she schooled and started her career as a secondary school teacher. She thereafter pursued her studies in Kenya. She holds a B.Ed. in English and English Literature from the Catholic University of Eastern Africa, an MA in Advanced Disaster Management from the University of Nairobi and an MA in Peace Studies and International Relations from Hekima University College. She is married to a Rwandan Survivor of the Genocide against Tutsi. She has been working for a couple of years on issues of community-based conflict resolution/transformation and peace recovery in Africa. She thrives in promoting homegrown and community led/ owned peace processes. The rich and positive aspects of the multifaceted African cultural heritage in dispute resolution mechanisms inspire these. She believes that African communities possess immense wealth of traditional knowledge, skills and abilities in conflict mediation which are relevant in today’s societies challenged by all sorts of violent conflicts. Leonie has had several opportunities in which she facilitated major multicultural conferences, community dialogue processes aiming at achieving social cohesion and integration, reconciliation and community development. These community-based peace negotiations processes were linked to government established transitional justice mechanisms such as truth, justice and reconciliation commissions in post-conflict countries.

Following the post-election violence experienced Kenya in 2007-2008; Leonie facilitated a dialogue process between two communities from the Rift Valley which led to signing a social contract for peaceful coexistence between the target communities. In 2011, she assumed the role of Chief mediator, leading a peace negotiation process that brought together 130 Elders from three ethnic groups. The actual peace negotiation process was a culmination of a three (3) year community dialogue process involving various stakeholders at various levels, including community leaders, church leaders, women, youth, peace actors, NGOs working on conflict transformation, the media and political leaders. The above process was successfully concluded with a signed peace agreement known as the “Mabanga Peace Resolutions”. The latter were very instrumental in negotiating a fair share of political leadership representation among the three major ethnic groups in the new governance system ushered in by the 2013 Kenyan general elections. The Mabanga resolutions contributed to reducing tremendously politically motivated violence that had become a cyclic recurrence every election year. Among other engagements, at regional level, Leonie was part of a team of facilitators in a regional round table held in Kinshasa, bringing together delegates from DRC, Rwanda and Burundi. Her key achievement in the team was facilitating the process of securing the commitment of all the delegates to support a citizen led regional roadmap to peace in the Great Lakes Region.

Further, the fight against discrimination based on gender and all sorts of gender-based violence that African women continue to experience at all times and in all spheres of their lives, is part and parcel of her engagements. Through partnerships with other likeminded organizations, she advocates for the establishment of reparations funds for women and girls survivors of sexual and gender based violence in post conflict countries; women’s access to and ownership of property; women’s active involvement in peace negotiations and post conflict reconstruction programs as well as women’s meaningful participation in governance and leadership spaces.

Leonie also holds training of trainers and conflict mediation/ facilitation skills. She is a polyglot; she speaks fluently English, French, and Kiswahili; communicates well in Lingala and Kinyarwanda and understands Kirundi. She also writes very well.