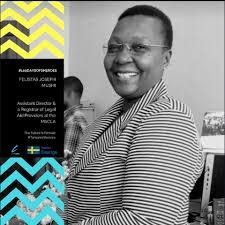 Felistas Mushi worked as a Resident Magistrate in Arusha Tanzania for 10 years before joining United Nations International Criminal Tribunal for Rwanda as Assistant Trial Attorney in 2005 for a three year contract. She resumed her Civil Servant position in the government of United Republic of Tanzania; first as a Principal Legal Officer in the Ministry of Constitutional and Legal Affairs, then as its Assistant Director. Ms Mushi is a member of ICGLR Regional Committee for Prevention of Genocide and a Chairperson of Tanzania National Committee for Prevention of Genocide, War Crimes, Crimes Against Humanity and All Forms of Discrimination.